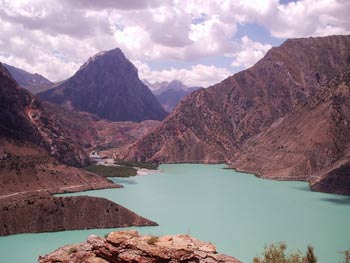 Tajikistan is picturesque country in Central Asia, its territory including the highest mountain systems in Central Asia, the Pamirs and Tien Shan, numerous mountain lakes, mountain villages detached from the civilisation, a dam which is the highest in the world, carpets of millions of irises, poppies and edelweiss flowers, crystal waterfalls and a number of historical and architectural monuments.

Today’s Tajikistan is popular among trekking lovers, who are eager to follow the numerous routes in the fabulously beautiful Fan Mountains and the highlands of the Pamirs and Tien Shan, mountaineers, who are attracted by high mountain peaks, among which are Ismail Somoni Peak (former Communism Peak, 7,495 m) and some others, jeep travellers, whose favourite road is the famous Pamir Highway, professional scientists and researchers, who study the ancient monuments and historical events, and ordinary people, who are interested in learning old legends in solitary settlements high in the mountains and who wish to visit places where the foot of man has never stepped.

At all times Tajikistan has been attractive as an important section of the Great Silk Route, the economic and cultural artery of the East, while Sughd Province of modern-day Tajikistan was once a part of the famous Sogdiana, which is testified by the Sogdian language still spoken in some areas of the province.

Location. Situated in the southeast of Central Asia, Tajikistan is the most ‘elevated’ country of the region, mountains comprising 93 % of its area. More than half of Tajikistan’s territory lies at an elevation of more than 3,000 m above sea level. The highest point of Central Asia, Ismail Samani Peak (former Communism Peak, 7,495 m), is also situated in Tajikistan. So, there is no need to say that the nature of the country is not merely beautiful, but fabulously beautiful.

Population – 8,000,000 people. The population density is 50 persons per square kilometre, it being spread more or less equally throughout the whole territory of the country.

Ethnic composition. Representatives of over 80 ethnic groups populate Tajikistan, of which Tajik comprise 80 %, Uzbeks – 15.3 %, Russians – 1.1 % and Tartars – 0.3 %. Apart from Tajikistan, Tajik also live in Uzbekistan (about 4 %), northeastern Afghanistan (over 3.5 million people), Kyrgyzstan (in regions next to the border with Tajikistan), southeastern Kazakhstan and the Iranian province of Khurasan.

Political structure. Tajikistan is ruled by the president, while the legislative functions are performed by a bicameral parliament, Majlisi Oli. Both the president and the members of the parliament are elected for a five-year term. The country features a multiparty system.

Administrative and territorial division. The territory of Tajikistan is divided into 3 provinces (viloyat), which include 17 towns, 62 districts, 55 villages and 368 rural communities (jamoat). Thirteen of the districts are administered directly by the state’s government.

The capital of the country, Dushanbe, and the 8 districts surrounding it form an individual administrative unit. The population of Dushanbe is 764 thousand people (2013).

Official language. Tajik is an official language spoken almost everywhere throughout the country. However, Tajik often use Russian words in their speech, which is caused by the large number of dialects (over 50) differing strongly from one another. Thus, Russian is both an international language and a means of communication within Tajikistan.

The Tajik language belongs to the southwestern group of Iranian languages and includes a number of words that came from Russian, Arab and Uzbek. However, their portion is insignificant and Tajik easily communicate with people speaking the literary Persian language.

Somoni is the monetary unit of Tajikistan, an only legal means of payment in the country. The Tajik monetary unit was named so in honour of Ismail Samani, the founder of the first Tajik state.

Electric power. The hotels may have both the contemporary European-type sockets with wide holes and ground connection and the old Soviet-type sockets. Current with a voltage of 220 V and a frequency of 50 Hz is used throughout.